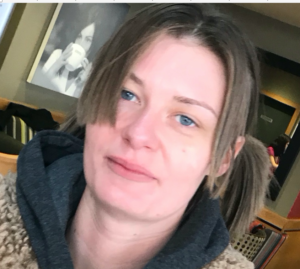 “My name is Kim and I became homeless when I was trying to get away from domestic violence.   My ex-partner was arrested for beating me up and so Gravesend council put me up at a local hotel. However, I had become addicted to Spice and although I tried hard to break the habit nothing seemed to work.  After the hotel I was put into temporary hostel while waiting to be housed.  But because of my drugtaking I was asked to leave – and that’s how I became homeless.

I was in a place of despair and hopelessness.  I found there was no support or help for me and my situation, although I did ask.  My addiction grew worse prevented me from finding shelter or food.  I felt completely lost and I didn’t want to be here anymore.

Then my housing officer told me about Sanctuary where I could at least get a bed for the night. This was at the end October 2019 and they had just opened for the winter period.  She suggested that I registered with them, which I did reluctantly.

At Sanctuary I met Lorna who interviewed me about whether I was suitable to stay at the shelter.  She was a really nice lady who made me feel welcome, and I’m glad to say they gave me a place to sleep at night. Up until then I had been sleeping on trains, in car parks, and in a 24 hour McDonald’s restaurant.

Going to Sanctuary – being accepted by the volunteers- gave me a purpose and a reason to live. They also gave me a reason to get up in the morning and say I have this addiction but my addiction does not define me.  Up until then I didn’t like myself – in fact I hated myself and everything that I did to other people.

I was placed onto a drug rehabilitation course offered by CGL although they did not understand an addiction to spice which caused some problems but I persevered and now I am clean.

My situation now is that I’m just about to move into my own flat provided by the council. It’s taken two years but at least I have it now and I’m starting to get my life I order.

Looking back, Sanctuary has been amazing. If you’re in a dark place Sanctuary is the place to go. It’s safe. It’s warm. It’s got good people that are actually willing to help you. They are there for you. When they say they’re going to do something, they do it.

I hate to think where I would be today if it hadn’t been for these wonderful people.”

Can you support us?

We are a local charity that is dependent on donations. Visit our Donate page for details of our bank account for regular standing donations

Keep in touch in what's going on in Sanctuary by signing up to our regular newsletter. You can unsubscribe at any time.

Download our annual report on what has been achieved over the past year.

Gravesham Sanctuary is a registered charity (No.1181817 in England & Wales) that works in Partnership with Gravesham Borough Council and with support from Churches Together in Gravesham, to provide an overnight shelter during the coldest months of the year (October - April) for the homeless living in the town.